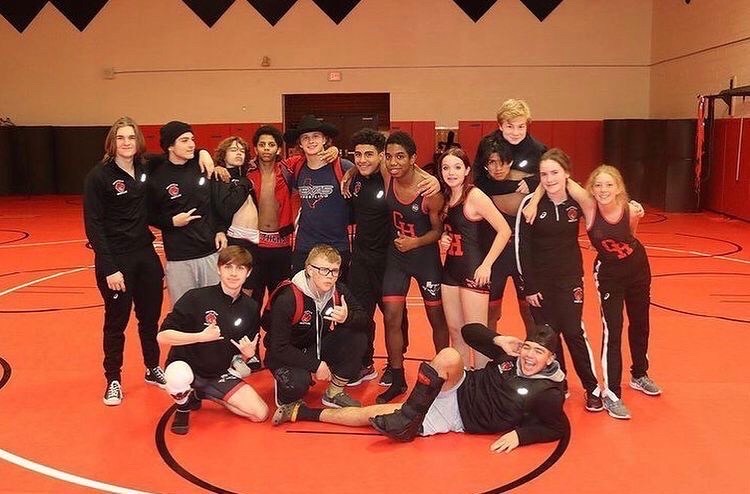 Our wrestling season started in November and will continue until mid-February. Currently Hayden Ullrich, number one on varsity, placed seventh in state. On February 22, the JV team participated in the district tournament at home. The regional and state tournaments are February 12-13 and 18-19, respectively.

Daniel McCready has been coaching wrestling for 19 years, two years at CHHS. His favorite part is seeing kids finally put all the moves and skills they have learned together in matches.

“My favorite part with wrestling is when everything kind of clicks in,” McCready said, “… and you see them apply the stuff they’ve learned in wrestling to other parts of their life. It’s not just like, ‘Oh, let’s learn a wrestling move.’ It’s, ‘Let’s learn how to do this other stuff as well.’”

McCready says although this year’s team is young, there is good leadership coming from the senior wrestlers.

“They lead the way for us really well,” McCready said. “Our leaders are great, our leadership is awesome. Todd and Hayden are in there leading the way, Natalia [Leal] is leading the girls program really well. She had a couple injuries and then some other issues she’s working through, but she’s still there for the team every day, in and out, doing what they need to do. It’s a… small group with just the three of them leading us right now, but… we’re very fortunate to have them.”

McCready describes this year as a “season of growth.” While there are a few seniors, the students are mostly underclassmen: mostly sophomores and freshmen. Bethany Hounchell, freshman, agrees that while right now most people are just starting out, in a few years they will all have more experience. She also describes it as a “learning year for everyone.”

“We have a really strong group of sophomores and then a few freshmen [that are] doing really well,” McCready said. “I think overall this year we’re just really excited with the progress we’ve made with a predominantly young group. On the girls side we have a bunch more girls this year than we had last year. This is kind of a season of growth, that we’re celebrating right now.”

Jeffrey Miller, sophomore, has been wrestling since eighth grade, so this is his third year. This wrestling season has gone well for him so far and he feels he has improved a lot since joining the team.

“I’ve improved a lot,” Miller said, “with Coach McCready teaching me a lot of new things and just being able to work on wrestling more.”

Bethany Hounchell has been wrestling for three years, starting in seventh grade. Her favorite thing about wrestling is that it’s more of an individual sport, more one on one.

“You are in charge of your own success,” Hounchell said. “You’re in charge of getting better and you don’t really have to depend on the team for that.”

When looking for a potential new wrestler, the first things McCready watches for is aggression, commitment and hard work.

Bethany says wrestling is a good community and everyone is close-knit. Miller says he’s met some “pretty cool” people from the team.

“It’s a great group we have here, a great group of kids,” McCready said. “We’re getting bigger every day, we’re getting better every day. We’re always looking for new recruits, so maybe if you got cut from a sport or it’s not working out in your current sport, we’re always looking for more members of the wrestling family, so come on over and give it a try and go from there.”