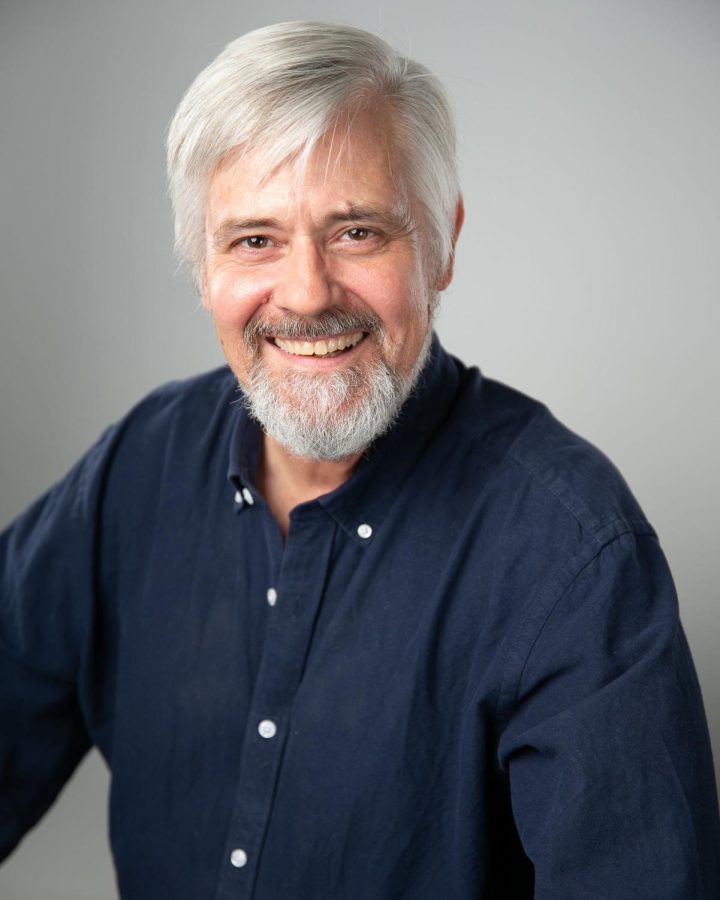 The Mousetrap. The Great Gatsby. Godspell. Little Shop of Horrors. Soon, Our Town. Everyone knows that the actors and actresses were important for these shows, but what happens behind the scenes? Who builds the sets? Who designs the costumes? Nothing would be possible without tech theater.

Barton Faulks is the tech theater teacher; this is his 13th year here. He doesn’t just teach tech, though. Each year he teaches one acting class, to “keep his feet in on the game.” He also usually directs two productions annually, but this year he is only doing one.

“The first opening I found [for a theater job] was not an opening for just a regular theater arts teacher,” Faulks said.  “Since I knew a lot about tech, including scenic and lighting design, I thought, ‘that’s the way to go.’ Then I kind of fell in love with teaching it.”

Faulks didn’t start teaching without first-hand experience in the theatrical world. Prior to his employment here, he lived in Los Angeles as an actor. He performed in multiple television commercials, a few movies and even a show on PBS.

“I lived out in LA six years, but I did some local work,” Faulks said.  “I did a Levi jeans commercial, M&M’s commercial, that was national. I did [an] American Heart Association commercial, I did a television series called Carrascolendas, which was a bilingual educational television show on PBS-did that for a year and a half. A film that hopefully I’m not known for, called Future Kill. I played one of the leads in that. And a film called The Edge of the Axe. Hopefully I’m known for my work like playing Claudius in Hamlet at the Dallas Shakespeare Festival. But you never know.”

Faulks has been interested in theater since he was a young boy growing up in Austin. He saw a musical adaptation of the story of Don Quixote de La Mancha, called Man of la Mancha. Later he saw Hello, Dolly and he fell in love with theater, specifically “hanging out on the catwalk above the audience.” However, teaching wasn’t entirely a new experience.

“I’ve always enjoyed learning new things,” Faulks said. “and opening up ideas to other people. I don’t know if it’s as much about teaching as it is about learning. And my students teach me a lot every year.”

Tech theater student Bee Brooks, senior, said that Faulks is wonderful and pushes his students to heights they aren’t sure they can reach. They said he always credits his students above himself and creates a welcoming environment in class.

“[My favorite part about theater tech] is the fact that it’s like family,” Brooks said. “Both Mr. Faulks and Mr. Mumford have created an environment in which everyone is incredibly accepting. Tech theater has never made me feel like I couldn’t be myself.”

“My first impression of Mr. Faulks was like I said, seven years ago when I student-taught,” Mumford said. “I was a young little college kid trying to be a theater teacher, and he welcomed me with open arms. He has this big, booming voice that as soon as you hear, you know that he is a genuinely good person. I also loved how he always focused on you, he always asked you how you were doing and he would ask about what I was interested in, and what I was passionate about. I think it really illustrated to me right off the bat that he cares about people.”

“I really love how personal he is,” Wright said, “even though he is really bad at names, he tries to get to know you as a person and you’re not just a thing.”

Faulks and Mumford constantly have to work together to create productions. Tech and regular theater are “two totally different universes,” Mumford said. They focus on two entirely opposite but uniquely important parts of theater.

“You have the actors, working on the script and memorization and performing,” Mumford said. “You have the technicians with the costumes and the set and everything else: the lights, the sound… So, it is a miracle that it works, and the reason why it works is because me and him communicate really well… So, often Mr. Faulks will come to rehearsals and help give pointers to the acting. And then… there will be times when I come on Saturday to the tech calls, where all the technicians are building and so forth, and I help paint or help do whatever needs to be done. We really work together and make sure that both are successful.”

In contrast to his recent technical producer role in The Mousetrap, Faulks will be directing the theater program’s upcoming production, Thornton Wilder’s Our Town.

“I’m the director for Our Town,” Faulks said. “It’s a wonderful message play, it’s written in 1952. It is kind of topical to this day. It asks you to take a look at your life and see that every moment that you’re alive is an opportunity to enjoy life to its fullest, and look and enjoy each and every moment that we’re given. And that we often times take those moments for granted.”